Do you have a mould problem?

If you have a mould problem, the correct diagnosis and advice is essential

Black mould is a significant problem for many homeowners. Condensation forming on cold walls and around window frames is the main cause of black mould growth with more than half the homes in the UK suffering from some form of condensation and damp.

Usually the mould spores grow on the coldest surfaces in the home, often around window frames, revealing itself on the outside corners of a room. You can usually see it at ceiling level where it meets the outside wall, often due to missing insulation. It can also occur at ground level behind furniture.

Mould can grow anywhere in high humidity - and damp rooms are ideal conditions for dust mites to thrive. Living with moulds for long periods can be unhealthy and potentially lead to health issues especially in the vulnerable such as young children and older homeowners. 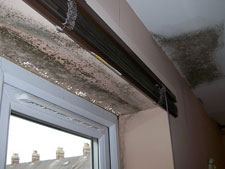 Severe condensation can cause mould growth

The presence of visible black mould would indicate a sustained water/moisture problem most likely to have occurred through a long term leak or simply high humidity created by so called lifestyle condensation.

What action can you take to prevent mould?

To prevent mould it is necessary to establish the cause of the problem and remove the initial source of moisture. Where leaks have occurred, attending to the repair and then drying of materials effectively is a priority, to prevent further damage.

Where condensation is the main problem, often created by lifestyle moisture production, specialist advice and ventilation solutions will be required.

If you suffer with condensation or mould problems, see our condensation page for more information or contact us and arrange for a home survey. 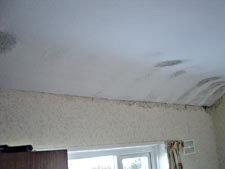 We provide professional condensation and mould survey reports. Our surveys are ONLY undertaken by experienced and fully qualified building experts who have the experience to diagnose the problems effectively.

Our mould inspections include: 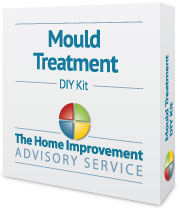 We can offer specialist help with mould removal and cleaning services. Dealing with severe mould is a task which must only be undertaken by a specialist, using the appropriate respiratory equipment and personnel protective equipment.

Want to know more about mould?

Attempting to remove mould yourself can result in the distribution and spread of dangerous spores into the air, placing yourselves and other occupants of the building at risk. Even small contaminated areas can potentially pose a high risk if handled incorrectly or in a dangerous manner.

What to do next

Applying DIY treatments to mould may be suitable for very small areas, general household bleach is not recommended for effective mould removal, as bleach has no residual activity for long term control and eradication of moulds. For these reasons DIY treatments are only suitable in some situations. To deal with the problem permanently you should seek professional advice.

Contact us for free help and advice, we can often help explain the problems and resolve mould problems during a phone conversation, or we can send you our fact sheet.

For very serious and severe mould problems, and for properties owned by Landlords, we would always recommend a home visit and survey. 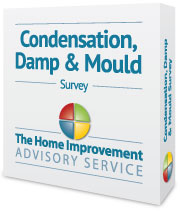 *For a typical home, including a full home inspection. Also includes on-going help and advice for up-to 12 months, subject to the location and size of the property. A fixed price is quoted in advance.